I am a big fan of Evernote and Microsoft OneNote. I have been using both for quite some time now and I have been automating several things to Evernote.

For more information on how to choose between Evernote and OneNote see this post.

Evernote have several features for automation built in and you can use it directly with several other applications and web services. Here are a few ones I found noteworthy:

click.to sends copied information directly to Evernote and more. You can use Evernotes normal global hot key shortcut to paste the clipboard to Evernote (Ctrl+Alt+V) but using click.to and configuring Evernote as a Satellite action makes it a more visual option. Also, click.to can send your clipboard contents to several other applications directly, such as your search engine, Google Translate etc.

Evernote has an auto import feature where you can designate folders as a pickup points for your files. You define it under Tools, Import Folders. I have a specific folder for import that also deletes the source file once it has been imported. I have placed the folder in my favorites list in explorer so that I can drag and drop files directly into Evernote without problem. I move the files I don’t want to save to Dropbox and copy files I want to retain at other locations.

Since Evernote doesn’t have a printer driver (OneNote does and it works very well) I can print a .pdf file from any application to this folder and have it in Evernote directly without to much fuss. 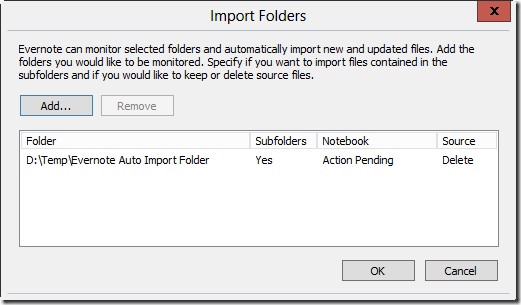 Snagit from TechSmith is a great way to make screen captures. I highly recommend it if you need to make any form of screen capturing on a more regular basis.

Once you have made your capture you can use the Share Tab in Snagit Editor to send your screen capture directly to quite a few applications, including Evernote and OneNote (and Facebook, Twitter, Word, PowerPoint, FogBugz etc…).

Automation from Dropbox with Wappwolf

Wappwolf is a Dropbox automator. It can do loads of stuff to your files in Dropbox such as convert your recently purchased e-book to Amazon format and send it to your Kindle for reading. Or you can use it to store information from Dropbox to Evernote.

Once you have given Wappwolf access, create an automation you need. In this case we want to upload the file to Evernote so we will choose the Any file area and specify “upload it to Evernote” and since we only want to store our file in Evernote we will also choose “Delete the original file” under Advanced. 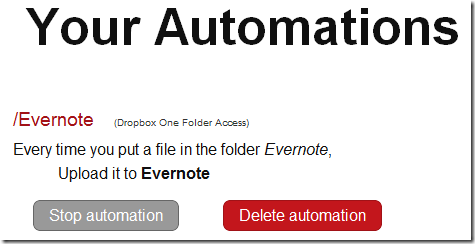 This works very well for applications that aren’t on my desktop but that can save to Dropbox, such as my Android phone applications (if for some reason the share to Evernote feature doesn’t work) or other web services that can connect and deliver to to Dropbox but not to Evernote.

For Swedish e-book readers with a Kindle the convert and send to Kindle is very useful. You can buy/download a Swedish e-book (unless its DRM/copy protected – then you would have to first remove the encryption since the normally used Adobe Digital Edition DRM format isn’t compatible with Kindle) and automatically transfer it to your Kindle.

IFTTT (If This Then That) is a very nice automation tool that can deliver directly to your Evernote notebooks.

You connect other services to Evernote and specify what should be saved and where. 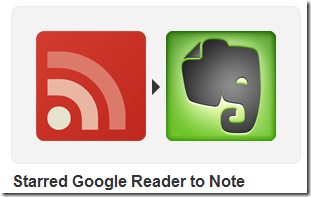 I use IFTTT for several automations and a few of them are for Evernote:

There are quite a few other useful applications of IFTTT but these are my current Evernote related ones.

Since I will scan it anyway and put it into Evernote, I signed up for their e-mail postbox (ePostBoxen) (a SharePoint implementation btw =) ) where I can sign in and pick up the electronic copies of the mail instead. From there I can save it to Evernote directly. Someone should write an automation channel for IFTTT of Wappwolf etc for this service so that I can get it to where it should be without intervention.

Standard features not to forget

While I’m writing, here are some plain old standard features I like.

Your Evernote notebooks have an email address that you can use to send information directly to. Its very easy to use when sending mail, just add the evernote address as a BCC and it will be automatically stored. If you send a mail directly to Evernote, you can also specify notebooks, tags etc in the message header. Don’t use this when BCC’ing, it will be very confusing for your recipient).

You find you Evernote email address alongside your account information.

You can let Google/Bing search search your notebooks at the same time as you search the web in Chrome. Very easy to find already compiled information while searching as usual.

You find this information in the Evernote Web Clipper add on.

I also use Evernote to store all my incoming papers. All normal scanners have the possibility to send the scanned result directly to an application and this works well with Evernote. I just put my papers in the scanner and press one button to get them into a notebook. If you want to get a scanner, make sure it has a proper paper feeder and can scan both sides of your document in one go.