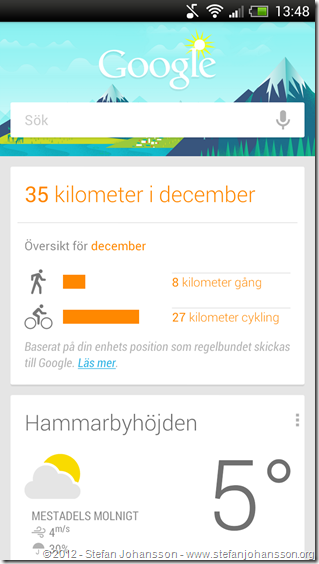 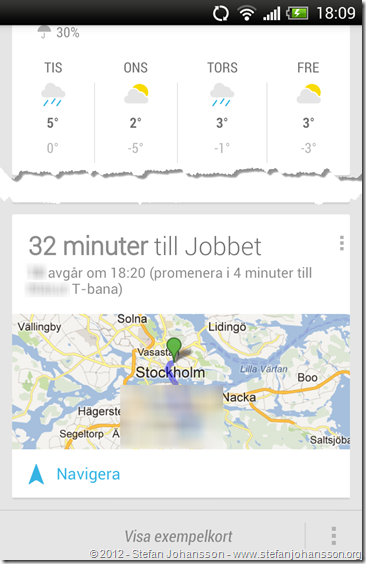 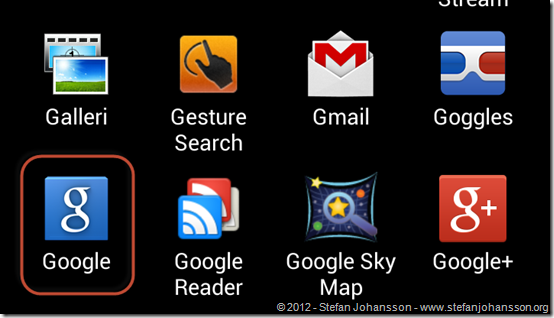 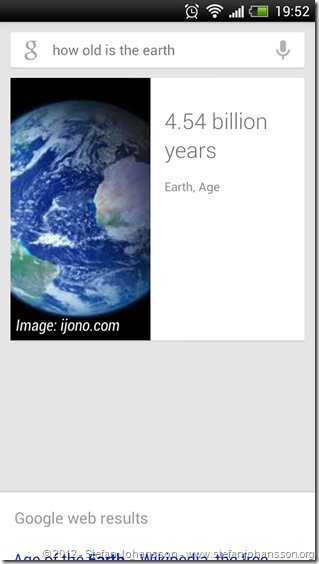 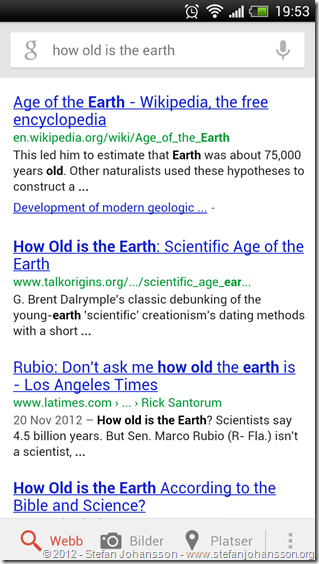 This post compares the Android versions of OneNote and Evernote.

They are compared on a Swedish version of the HTC One X running Android 4.1.1

Introduction to the apps

Both apps are available from Google Play for free. The Evernote one is available for both free and premium accounts and the standard differences between the account types are applicable for mobile apps (There are some differences such as pin code security and offline notebooks). The OneNote app is also free but requires an in app upgrade once you hit 500 notes. 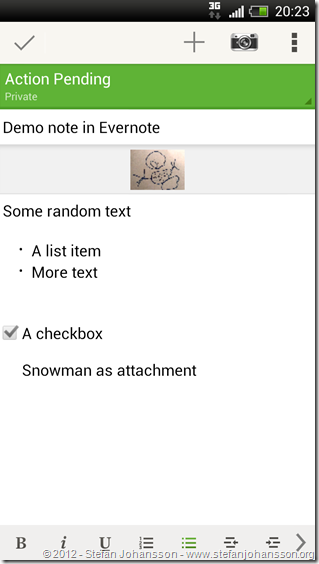 Create a note in Evernote. 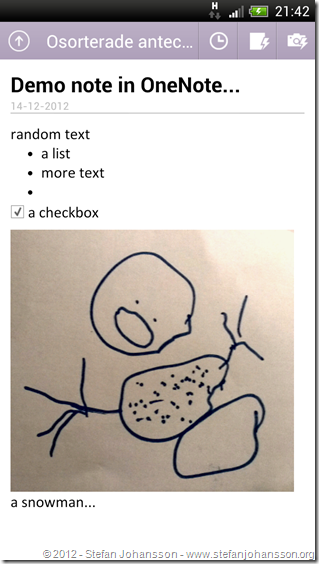 Create a note in OneNote

The creation process is a bit different between the two platforms.

Evernote creates empty notes that you can enter text into. images etc. are attachments to the note and doesn’t show up inline in the note. In the note you can change text to bold, italics and underlined. you can add ordered and unordered lists and checkboxes. You can move the note to another notebook and you can add tags from the tags taxonomy with ease.

Evernote is a more evolved Android app. it has both several widgets and support for shortcuts and shares. OneNote only has the app and everything you can do is done within the app – interaction with the features of the Android operating system is an area of opportunities for improvement. 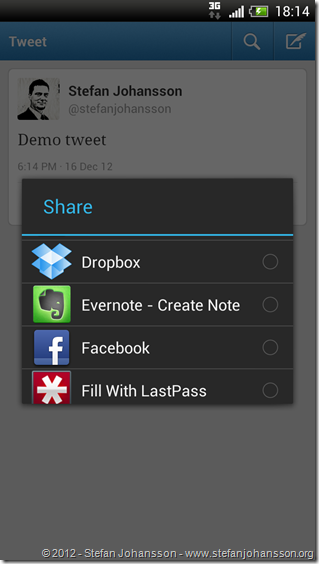 From a start page/panel on Android it is possible to add both widgets, applications and shortcuts. Evernote has very good support for shortcuts to notes and saved searches etc. From the Android add shortcut interface you can create a shortcut to an existing note but you can also create shortcuts from almost everywhere in the app. so if you have a specific view or a search that you want to have direct access to from a start panel you can create it and save it directly from the app. 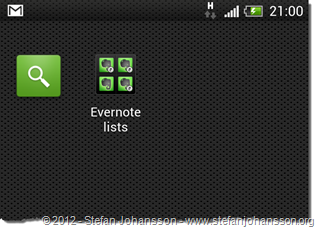 Above: Evernote search and a folder of lists as shortcuts to search results on a panel in Android. 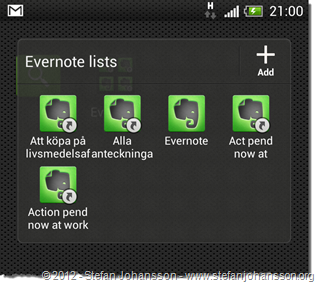 Above: Evernote folder with shortcuts to search results.

With the flexibility of shortcuts it is easier to work with a GTD approach of one note for each task/to do item. It is also easy to mix results so that you can have a specific shortcut to the list of groceries to be bought and a list of all items in the Actions Pending list for Now and At the office etc. You can even search out all notes in the Actions Pending book that have unchecked checkboxes so that you can be sure nothing gets away unchecked.

The Evernote Widgets are available here at Google Play if you don’t have access to them.

Another key area of Android is widgets, application features that display directly on a start page/panel. Evernote has several different to choose between and use, including handy shortcuts to create new notes from audio capture and photos. OneNote has no support for widgets. Once you place a widget on a panel you have more customization options to suit your needs.

Above: Evernote Widgets in Android.

Storage space available is the same as for the Evernote accounts and OneNote. The difference is that Evernote is limited to a maximum upload per month (free: 60MB, premium: 1GB) and OneNote uses the storage space that you have on SkyDrive (Free 7GB start (down from 25GB), 20/50/100GB available for purchase).

OneNote 2013 compatibility: It says in the app information that it is compatible with OneNote 2010 but I have tested it with a OneNote 2013 workbook without any issues.

Evernote app has an offline access mode for premium accounts so that you can choose what notebooks should be available offline in Android.

Compared to the Desktop Applications

OneNote is a very feature rich desktop application. Evernote is feature rich but a bit different on the desktop. On Android the roles are reversed, Evernote is the more feature rich app. Even basic feature such as bold text seems to be impossible in the OneNote app, whereas Evernote app has all the features expected from an Android app…

Both Microsoft and Evernote have related apps available: 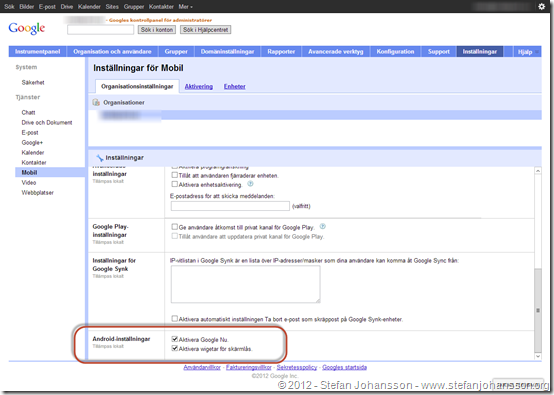 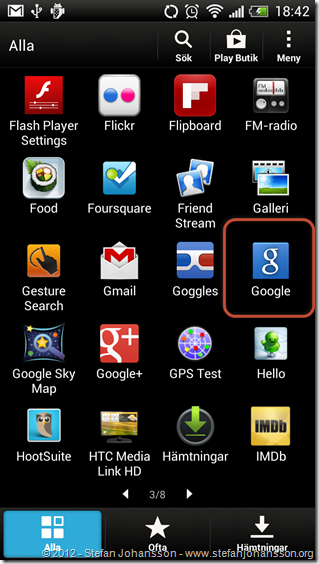 How to enable week view in the HTC One X standard calendar.

I have seen quite a few reviews and blog posts (Such as this review from Gizmodo) where the calendar function in the HTC One X gets poor feedback because of lack of a week view. This is peculiar since it is actually right there in the calendar. The week button is not enabled by default for some reason, but an easy tap and its ready to play:

(Screen captures above are in Swedish…)

If you want an even better calendar experience, consider installing a more advanced calendar application/widget such as the Pure Grid Calendar Widget (Available on Play) that displays a much better week view with more information about each event.

There are several automation web services available that will do your bidding automagically. Here is a list of a few that I have found works well.

Wappwolf integrates well with Dropbox, box, Google Drive and Facebook and can process them for you in quite a few different ways. For Dropbox, you can convert files to PDF, downscale images, convert audio files, rename files, upload files etc.

Wappwolf is free for 3 active automations and max 100 files/100 MB per day and runs every 15 minutes. There is a premium option available for $5 for one week or $10 for a month of increased processing.

Above: Dropbox automations provided by Wappwolf

IFTTT automates quite a few services. It can archive your online presence into Evernote and it can create posts for you based on different events. It has a very easy interface to create custom recipes/automations so that you can create custom actions if none of the available ones fell quite right. Remember to test any recipe, I have found several ones relying on external services that didn’t work as expected.

IFTTT is free at the moment but like everything else will need to figure out a way to make money in the future, either by fees or ads or by being bought and incorporated into a larger offering… 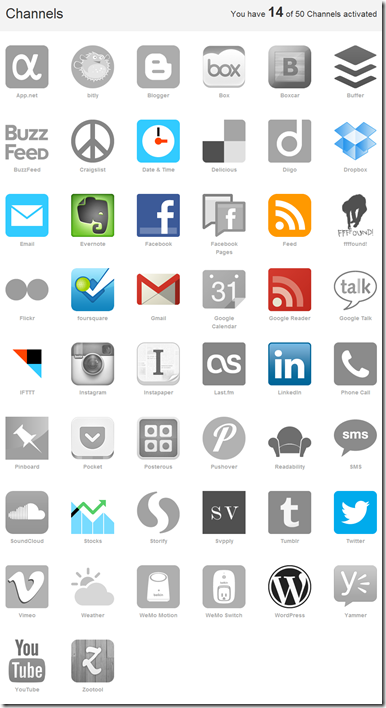 Above: Channels provided by IFTTT

on{X} is something as odd as a Microsoft automation service for Android phones. And it requires Facebook logins instead of LiveID/Microsoft accounts. One might assume that the service will be released and incorporated into the upcoming Windows Phone 8 OS.

on{X} uses a growing API of triggers and services for your phone to sense different events and activate functions based on them. It could be as simple as checking the weather the first time you activate your phone in the morning and remind you to bring an umbrella if it is going to rain.

Or it could be more advanced, such as launching the Foursquare app if you’ve been at the same location for more than 20 minutes etc. It has a more advanced programming based User Experience so you can create quite advanced custom events if you feel the available automations/recipes are lacking.

on{X} is free at the moment, but you need to install the app on your phone. Never mind the poor reviews, it is a very misunderstood feature. You also need to log in to the web site with your Facebook account and create your automations there. 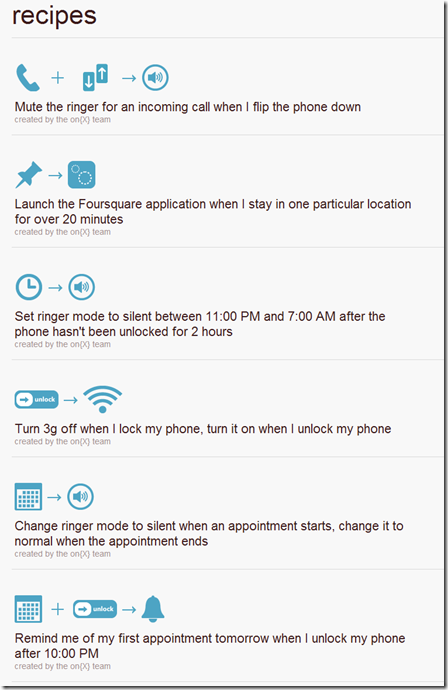 Above: Sample Automations in on{X}

zapier has quite a few different integrations and has a more professional approach with different plans for different levels of their service, from free 5 hour checks to 200 integration checks every 5 minutes for $100/month. zapier also supports a broader range of services such as most of Google services including Google Drive and Microsoft services such as SkyDrive. For personal use it would be best suited for automations where none of the other services are available and where you can live with a 5 hour delay. If you need faster service you would need the basic package for $15/month 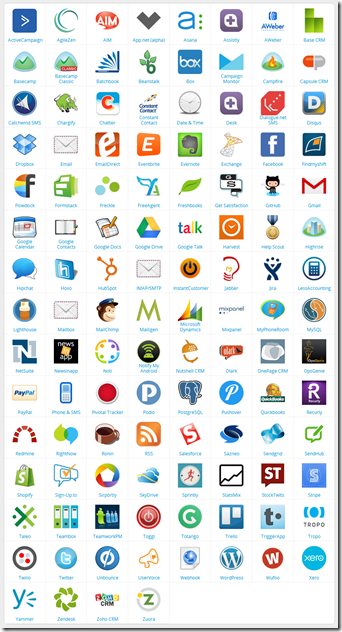 By using any of these services, you give them access to a lot of your information. If you aren’t comfortable with this you probably shouldn’t use them. But then you might not want to use any of the cloud services they connect with to begin with.